Global Conflict is an edutainment franchise developed by Serious Games Interactive.
The purpose was to have students play a game involving people living in or around conflicted areas, such as Afghanistan, to help them better understand the conflict and some of the issues involved in living in a war zone as a civilian.

I sound designed and implemented most of the ambient sounds and a few interaction sounds.

Here is a screenshot from the game 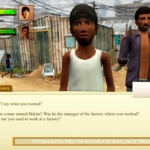